The Bucyrus Foundry and Manufacturing Company of Bucyrus, Ohio, was experiencing growing pains because they could not expand beyond their existing one-and-a-half-acre location. A delegation of the founders visited Bucyrus, and after protracted negotiations a contract was signed on October 3, 1891: Bucyrus would move from Ohio to Wisconsin. The South Milwaukee Company would pay Bucyrus $50,000 in cash and land valued at $45,000. Eight acres were adjacent to the railroad tracks, five acres of building lots, and two acres of dock space on Lake Michigan. A railroad spur line would also be constructed to connect their plant to the lake. Chicago Road was also rerouted from its crossing of Oak Creek at Hawthorne Avenue, so as not to cut through the Bucyrus property. (It formerly ran on a diagonal from the creek crossing to the current railroad depot.) Bucyrus completed plans for the new factory in July 1892, and the Chicago construction firm of Whitney and Starings completed the first buildings by January of 1893.

Bucyrus realized transportation costs would be higher and that attracting workers would be difficult with this move. The new factory location initially lacked civic infrastructure, described by some of the Ohio visitors as “inadequate housing, unpaved streets hub-deep in mud, and a lack of community life.” Because of that, less than 10% of the Ohio workforce came to South Milwaukee to work. Trains brought workers from Milwaukee, and others were recruited and the men stayed in company-provided barracks until they could find other housing. Among the immigrant groups who found employment and flourished in South Milwaukee were the Polish, Armenians, Germans, and Bohemians. Early employment averaged 100 men, about 50 percent more than in Ohio. While the company acquired greatly improved production facilities, the advantage was offset by the loss of efficiency due to the new and much larger workforce.

The company officially began operations in South Milwaukee in April of 1893, and would incorporate in Wisconsin as the Bucyrus Steam Shovel and Dredge Company on August 16, 1893. It continued to serve as the dominant employer in South Milwaukee for more than 115 years. Early South Milwaukee machine production focused on railroad and dredge equipment. Its railroad cranes, pile drivers, and steam shovels helped build the world’s infrastructure. Most notably, 77 steam shovels were provided for the construction of the Panama Canal. Between 1902 and 1911, 60% of the company’s shipments were steam shovels, with 30% in dredges.

Bucyrus bought land surrounding the plant between 1912 and 1927, and developed the street, water, and sewer infrastructure. It sold the lots to employees to build their homes for cost, to encourage a sense of community and loyalty to the company. It also provided an employee bonus program to guarantee second mortgages on homes for up to 20 percent of the building price, and in 1919 lent its financial support (approximately $23,000) to start the “Liberty Home Building Association,” which funded construction for many of the surrounding home building projects.

As the new factory expanded, it became self-sufficient, adding foundry and forging processes. During World War I, Bucyrus forged more than 150,000 eight-inch artillery shells and produced 100 recoil slides for field artillery pieces. It also produced numerous railway cranes and equipment for European allies. After the war, markets expanded and mobile shovel models of various sizes became the main production focus. In 1927, the company purchased the Erie Steam Shovel Company and changed the name to Bucyrus Erie. During World War II, Bucyrus produced draglines, shovels, 240-millimeter Howitzer cannon barrels, caissons, dozer-shovels, and other equipment to support the war efforts. In 1942, Bucyrus had 507 of its 2,000 employees volunteer or get drafted into service; women entered the workforce in large numbers to fill the voids.

After World War II, the company expanded north of the old Rawson Avenue plant boundary to cover another 22 acres, and new foundry operations, heat treatment, and casting and weldment storage areas were added. By the 1950s, “BE” machines would be performing work on every continent, and the company eventually became the world’s largest construction and mining machine supplier. For years, the South Milwaukee plant operated three shifts around the clock to support what the machine industry labeled “The Longest Line” of construction, mining, lifting, and material moving equipment in the world.

Bucyrus Erie again changed its name in 1997 to Bucyrus International to reflect the worldwide business reputation that the company enjoyed. Bucyrus eventually purchased three of its largest competitors – Marion Power Shovel, DBT America, and Terex – to make South Milwaukee the largest mining machinery supplier city in the world. At one point, Bucyrus employed more than 2,400 people in South Milwaukee. Worldwide, it had 3,700 employees and 17 plants and subsidiary operations.

Caterpillar purchased the company in 2011. The products were rebranded and the Bucyrus name would no longer be used. Caterpillar would continue to operate on parts of the property; however, production at the main plant ceased in 2016 after 123 years of continuous operation. Still, many South Milwaukee residents worked or had relatives who worked at Bucyrus, some into the third and fourth generations. The property is now owned by Reich Brothers and is being redeveloped. 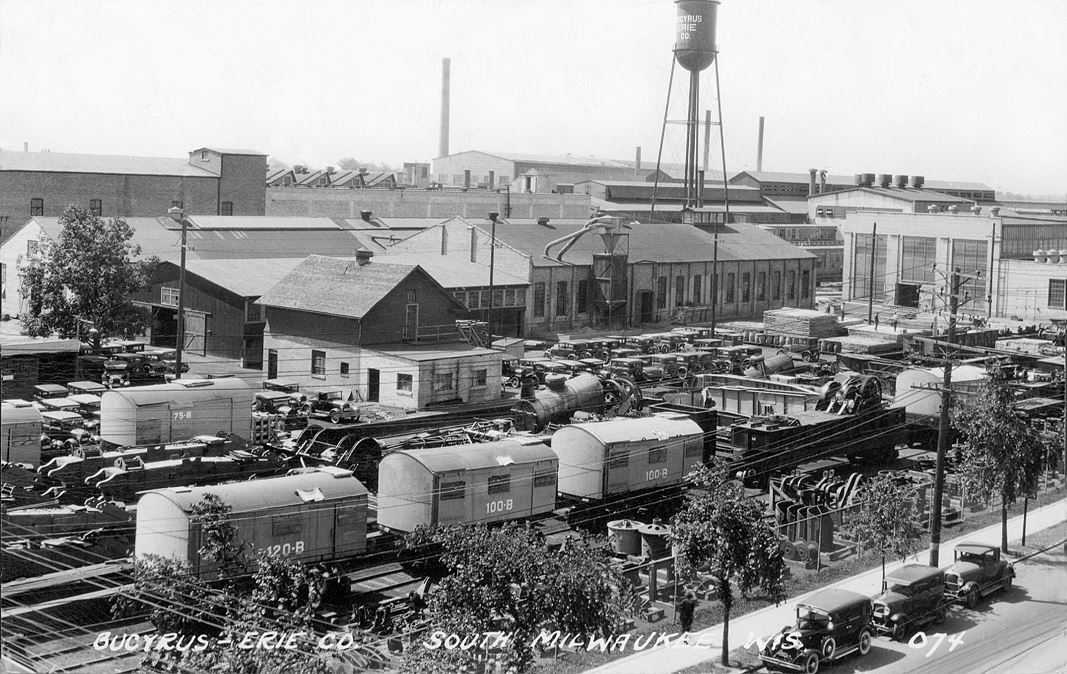